The Best Way to Travel Through Vietnam 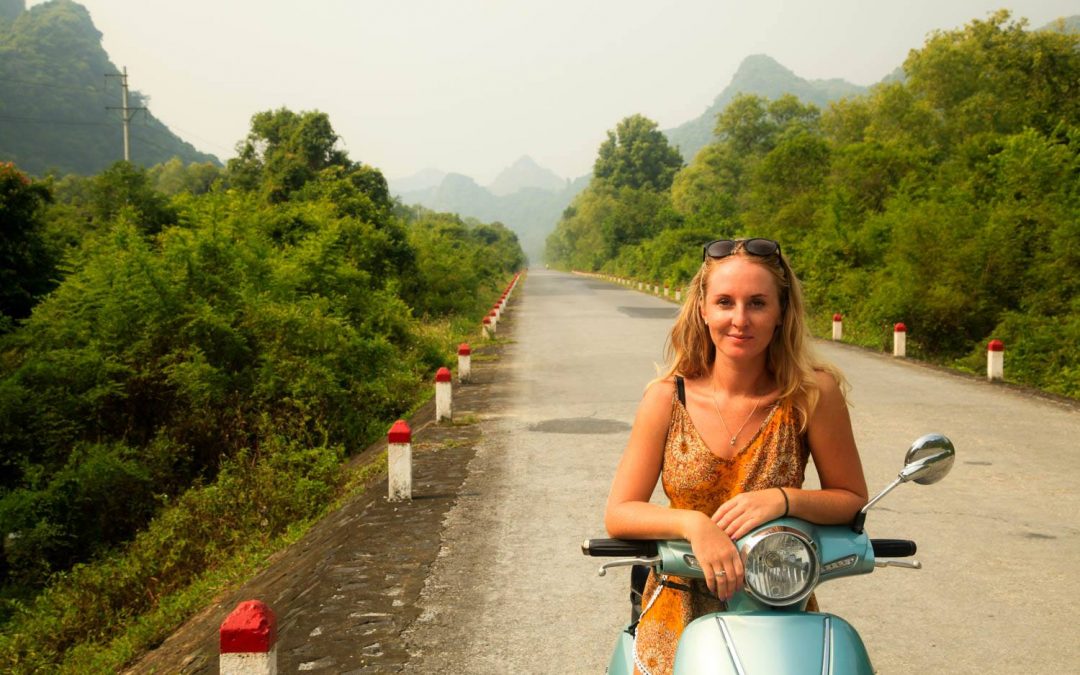 It can be difficult trying to find the cheapest ways to travel, but also the most convenient. If you are reading this blog post, then you must be wondering what the best way to travel through Vietnam is.

When we were there, we started in Ho Chi Minh City (Saigon) and made our way up to Hanoi. We had 3 weeks to complete the whole of Vietnam, so we had to come up with a pretty good plan to get around in time.

For those of you who don’t know, Vietnam is very long. When I say long, I mean there is a whopping 1621km (according to Google maps) between the two major cities. To put it into perspective, that’s a 32 hour drive (and that’s in a car).

Hiring Cars Is Not a Popular Choice in Asia

In most Asian countries, hiring a car is not a popular thing to do among tourists. If you have ever been to an Asian country, you’ll understand why. Their driving (and traffic) is beyond chaotic, but somehow they all seem to understand the mayhem and make it work? However, driving as a tourist is a completely different story.

One day we hired a scooter and came to a roundabout. There were, without exaggeration, around 60 other scooters waiting to get onto the roundabout at the same time, alongside a few cars. The locals didn’t stop and began driving into the roundabout with oncoming traffic heading their way. Some people even started driving their scooters up the pavements to avoid the queues. I couldn’t believe it. I held on so tight to T at the back and couldn’t wait to get off.

Now, although it sounds bizarre, I believe we were actually better off on the scooter than we would have been in a car. The scooters are able to squeeze down the side of many vehicles and can also go down a lot of backstreets, avoiding busy traffic. If you were driving a car, you would have to try and dodge the copious amounts of crazy drivers, and that would prove pretty impossible.

I will say though, if you plan to hire a scooter, you MUST be a confident driver. And if you’re not, at least have a practice on the quieter roads until you get the hang of it.

Scooters – Hiring a Scooter in Vietnam

So, hiring a scooter is a really cool thing to do in Vietnam. They are very easy to get access too, and are extremely cheap to rent. There is a rental shop on almost every corner. It usually works out to be around $10 AUD max for the day, including petrol. They are great for day trips as you can explore as much as you like, with all the freedom in the world. The only downside is the pain in your bum after a whole day on one of these things! 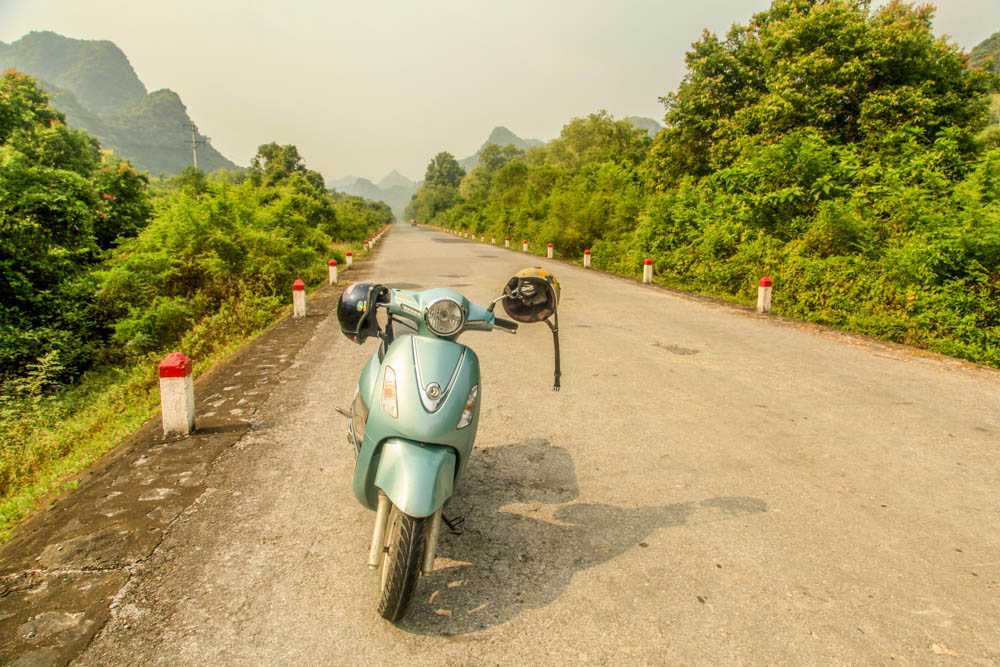 How to Stay Safe Whilst Driving the Scooters

Before you set off with your rental scooter, make sure the breaks and the lights work.

This may sound obvious but one time we didn’t check the lights as we picked the scooter up at 8am. On our way back it got to dusk so we decided it would be sensible to put the lights on, and they didn’t work. We were about a 40 minute drive away from the rental shop, and the sunset was due within the next 30 minutes. The journey home was through dark, mountain roads, with 0 street lighting. We were literally rushing against time as there was no way we could drive that road in the dark. Simply by trying to beat the sunset, we were putting ourselves at risk. It was a very scary experience and something that could have easily being avoided!

Also, PLEASE PLEASE PLEASE get a helmet when you rent a scooter. The driving is Vietnam can be very dangerous at times, and you’re travel insurance will not cover any accidents if you didn’t have the correct gear on. Forget about the hat hair or how terrible you look in a helmet – just go out and rock it.

TIP! scooters are only allowed in the right-hand and middle lanes. Do not use the outside left lane to take-over as you will be heavily fined! (and shouted at by a lot of angry locals!) 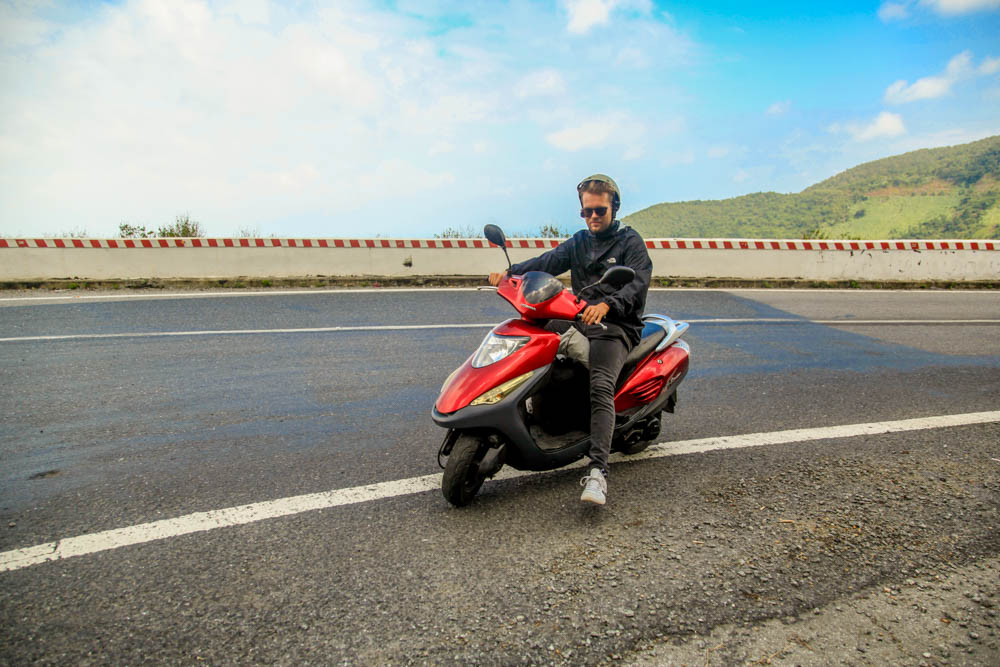 BONUS TIP! There is also a ‘rumour’ that tourists aren’t allowed to drive more than 40kmh on the scooters. In all honesty, I think it is just a scam to get some money off the tourists.

Now, I cannot back this up with concrete evidence, other than speaking to a few people who were actually fined for driving over this limit. We were told on a number of occasions by different sources, that there is no defined penalty, and the police actually just take all the money that you have on you at the time. There are 2 ways you can go about this…

Hide the money in places that they simply cannot check [ehem]

+ You could also try driving at 40kmh?? But then again, you’d probably need to lengthen your stay… 😉

Bus Transfers – Should You Travel Through Vietnam Via Bus?

Definitely the cheapest, but most certainly not the most convenient, way to get around in Vietnam. The bus transfers are completely fine to use in Vietnam. In fact, they are actually quite comfortable – for short distance trips. Trying to describe what the inside of one of these things looks like is pretty difficult though. There are around 40 “bed-like” seats, in a bunk-bed style within the bus. So just imagine, a bottom bunk and a top bunk, in rows of three, from the start of the bus to the end. The seats are small, but luckily for me it was the perfect fit. T, on the other hand had to sit with his knees bent the whole way.

The bus transfers connect most of the places in Vietnam, making it very easy to get from one place to another. Most of the hostels/hotels can organise these for you or you can visit a local office. The distances vary between each place, but more often that not, you are looking at 6+ hour journeys. The buses also include your luggage within the price. This is great if you have a few extra kilos, as you are not going to be charged extra for it (winning!).

The buses are very cheap to use and will never cost you more than $15-20AUD per trip.

What is the Best Way to Travel Through Vietnam? – Downsides to Bus Transfers in Vietnam

Okay, so I know not everybody has the bladder the size of a pea, but if you do, the bus transfers can be awful. I am TERRIBLE when it comes to needing a wee, so 24 hours prior to getting the bus I had to purposely dehydrate myself so I wouldn’t need the toilet. T didn’t bother to prepare (standard) and within an hour of getting on the bus he was already needing to pee. He spent the next hour and a half complaining about needing to go and actually considered doing it in his water bottle. The buses do not have toilets on them – although I think this is probably a good thing considering the standard of bathrooms in Asia!

There can be a few issues with the language barriers, as many local Vietnamese barely speak a word of English. We had no idea when we were supposed to get off the bus and we had no idea if they knew either. The drivers’ assistant comes round at the beginning and asks you for your hotel/hostel name – make sure you have it. If you don’t, they won’t advise you when you’re supposed to get off, because they have no idea where you’re going. Write down the name and address on your phone or in a notebook and have it handy when you get on the bus.

We told them the name but still were unsure what was going on. Luckily for us, we bought a local SIM card the day we arrived, so we were able to turn 3G on to track where we were going. We actually got up a couple of minutes before arriving to our hotel to let them know we were nearly there. Don’t worry too much though, you can get by with sign language and google translator.

Duration of Each Journey

The duration of each journey can also be daunting. The tour companies tell you a rough estimate of how long your journey will be, but it’s always longer. We had a 5-6 hour bus ride from Ho Chi Minh to Mui Ne, with only 1 stop.

Bare in mind that some of the journeys can be up to 15 hours long. It will save you so much money using this option, but if you have some spare pennies, I would highly consider getting a flight. We flew from Da Nang to Hanoi, avoiding the stretch in the middle because we were short on time. It was a quick 1 hour flight and we spent the rest of the day exploring Hanoi City.

Some of our friends however took the 15 hour bus journey and said it was one of the worst things they had done. The seats become very uncomfortable after a couple of hours and the bus only stopped 2-3 times. It depends how much time and money you have.

If you are not on a schedule, you could break it up with a few shorter bus rides and see a few extra places on the way.

Bus Transfers in Vietnam – Should You Use Them or Not?

Of course you should. They are definitely the cheapest and somewhat easiest ways to travel through Vietnam. Our bus journey from Ho Chi Minh to Mui Ne only cost us $8 AUD and around $10 AUD from Mui Ne to Dalat. That is insanely cheap! If you have the time, and patience – then travelling through Vietnam can be one of the cheapest trips you’ll do.

You should 100% use the bus transfers for the smaller distance trips. Anything from 5 to 8 hours is bearable. Anything above that, I would consider looking at other available options.

If you are short on time, and don’t fancy taking that horrendously long, uncomfortable bus journey, then you should consider getting a flight. There are local air companies that connect the major cities in Vietnam. Jetstar also offer a number of flights. 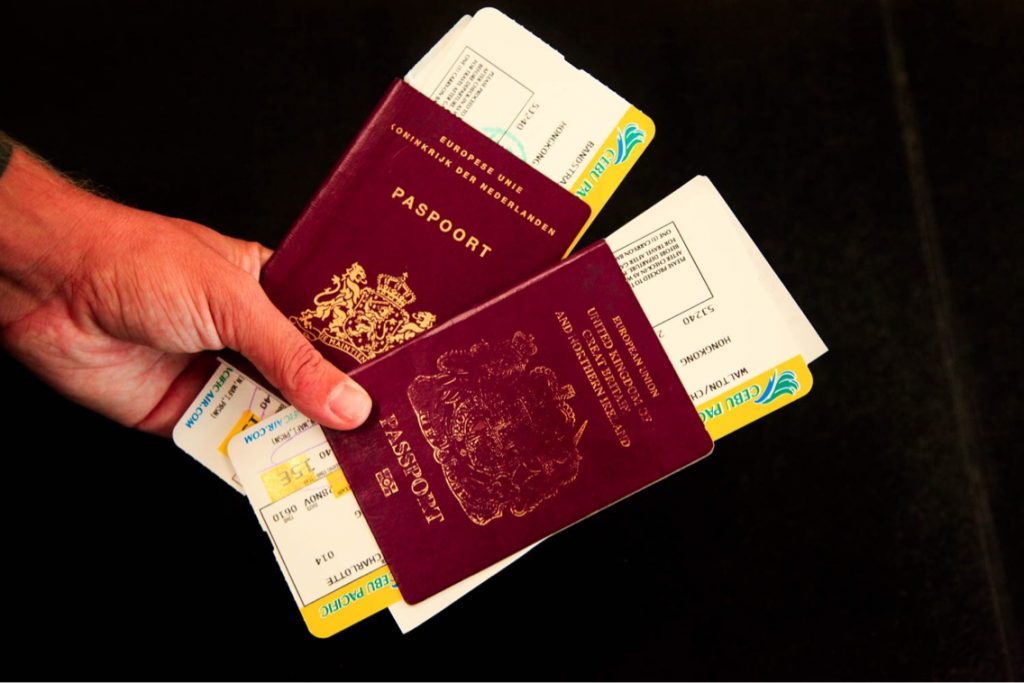 In between Da Lat and Da Nang, there isn’t too much to see. We had the choice of a 15 hour straight bus journey, or a 1.20h flight. We chose to fly.

Flight prices can be quite expensive, especially when you compare it to that of the buses.

We don’t regret flying as it saved us a total of 2 days of travel. We needed every single day considered we only had the 3 weeks.

Like in most places in Asia, this is a controversial topic. In the major cities, such as a Ho Chi Minh and Hanoi, Uber is completely accepted. In the smaller towns however, not so much. Consider taking an Uber if you are travelling from one city to the next that only has a short distance between them. We used one from Da Nang to Hoi An because the bus deals weren’t that great.

It took around 1 hour and only cost us about $15-20. It was way easier for us. We were picked up from our hotel and dropped off at the door of our next one. After we split the cost, it worked out cheaper for us than taking the bus.

What Is the Best Way to Travel Through Vietnam?

As I mentioned before, it really does depend on how much time, and money you have.

In my opinion, from previous experience the best way to travel through Vietnam is: