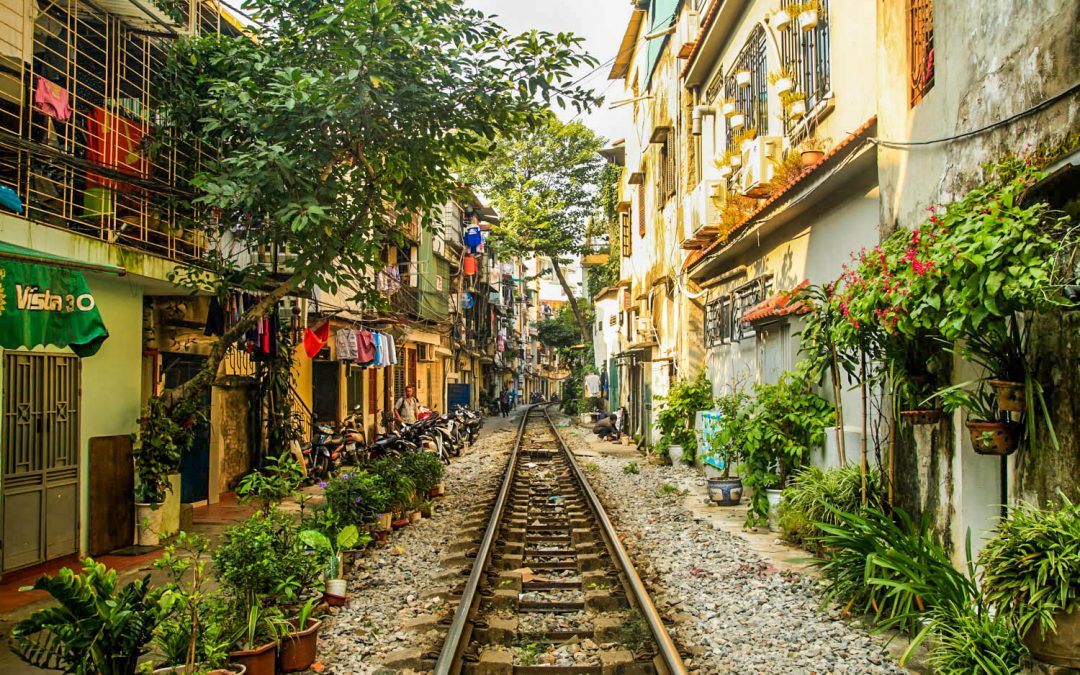 UPDATE [NOVEMBER 2019]: Please check official Vietnamese websites to see whether it is still possible to access this street. Unfortunately excessive tourism is once again ruining what used to be an incredible experience, and I believe there is talk of temporarily closing this street. Since my visit in 2017, numerous bars have popped up and taken away from the authentic experience but read on to find out the best times to visit and the best spot to go to!

Hidden among the busy streets of Hanoi Old Quarter lies an exclusive street offering an incredibly surreal experience. Usually as you wonder around the streets of Hanoi, you’re dodging motorbikes, but on this particular street, you’ll find yourself trying to avoid something way bigger. Welcome to Hanoi Train Street.

We first came across the Hanoi Train Street on the beloved #Instagram app when one of our close friends uploaded a picture to her feed. Before seeing this photo, we hadn’t even heard about this street. I messaged her to see what it was like, then began to do some research before our trip to Vietnam. 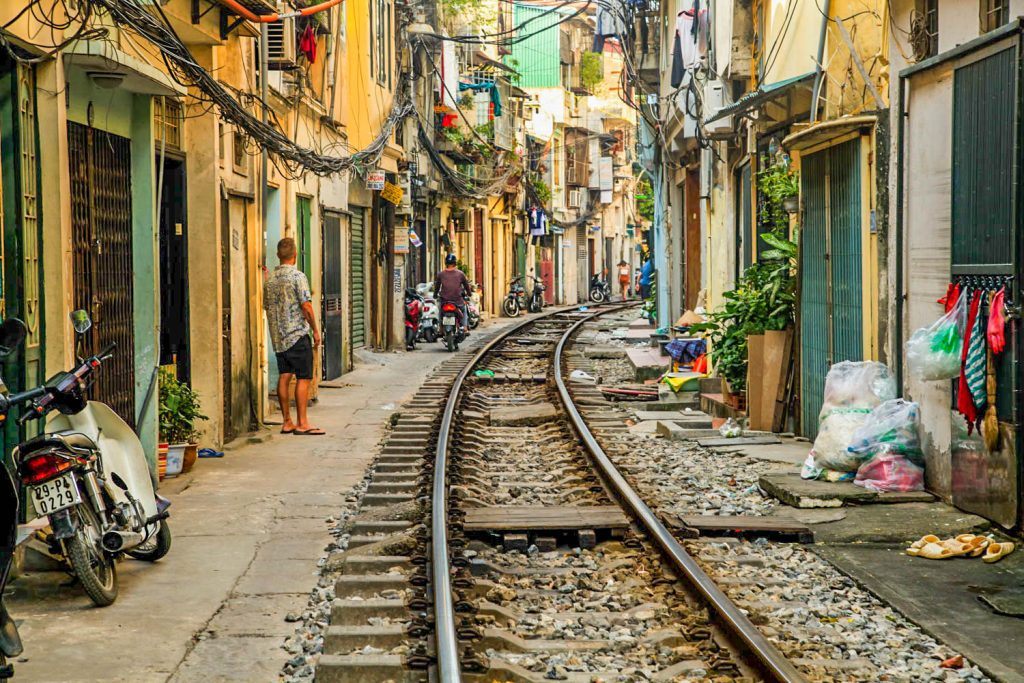 The Hanoi Train Street is located in Hanoi Old Quarter, on a street that runs parallel to the popular Le Duan street. As you can see on the map below, there is a thin line, indicating the railway line.

The exact address is Ngõ 224 Lê Duẩn, Đống Đa, Hà Nội, Vietnam. If you look at the map, you’ll notice a spot called Tap Doan Cong Nghiep Than just below the red dot. Here is the easiest place to access the train track. This is the point where the Hanoi Train Street meets Le Duan.

As you approach the track, take a right and follow the track in that direction to reach the heart of the street.

According to the locals of Hanoi City, the train only passes twice daily: one at 3.30pm and one at 7.30pm. [UPDATE November 2019: There are now multiple trains each day]

If you are planning to take pictures of the Hanoi Train Street, I recommend that you arrive around 3pm. Not only will this give you enough time to get a few shots, it will also allow you to see the local people going about their usual day. One of the best parts about this whole experience is seeing the locals hanging out their washing alongside the tracks, spray painting or fixing their scooters and children playing with not a care in the world.

Slowly, you begin to notice that things are changing. There is no warning of the oncoming train, other than its horn when it is approaching the nearby corner. When we lifted our heads up from the camera for a moment, we noticed that the lady and her washing had moved in doors, there were no more children on the lines, and the local man was locking up his bike in the garage next to us.

Not a single one of them were wearing a watch, leaving us completely amazed that their body clocks were so intact with the passing of the train. Moments after everyone vacated, we heard the train’s horn and quickly moved away from the track. A local man looked at us and told us to get back further, although there wasn’t anywhere else to go. We were slightly panicking but the adrenaline began to rush through our bodies. 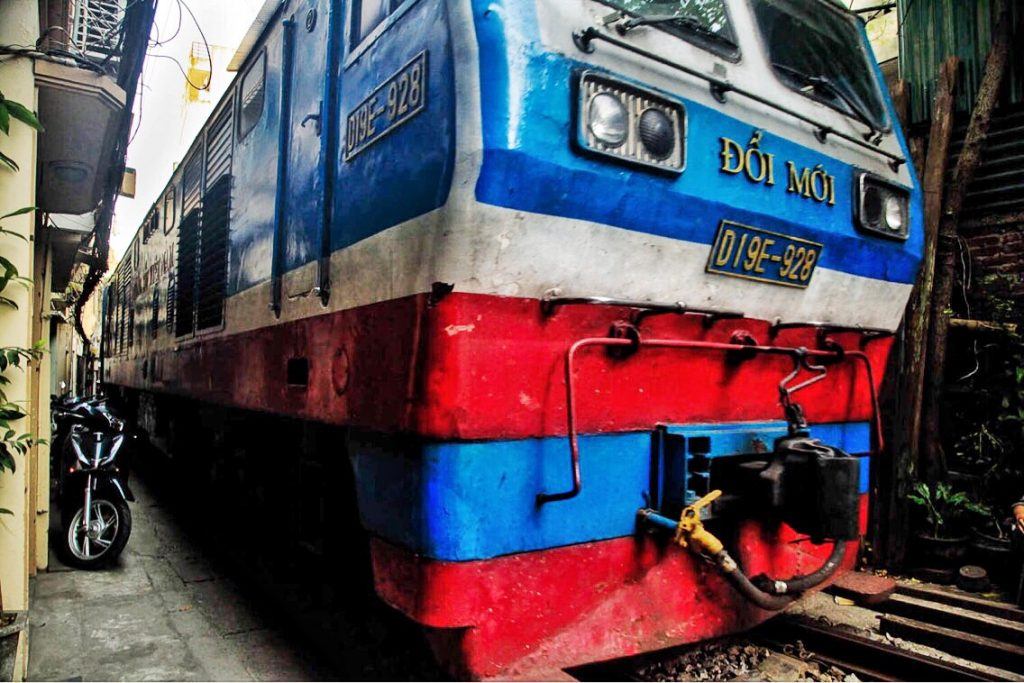 The train shot passed us at full speed, sending vibrations through the ground and walls around us. Without exaggerating, there was less than a metre between us and the train. A total of 20-30 seconds passed and we saw the train disappearing into the distance. The locals began to emerge and carried on with their daily chores. 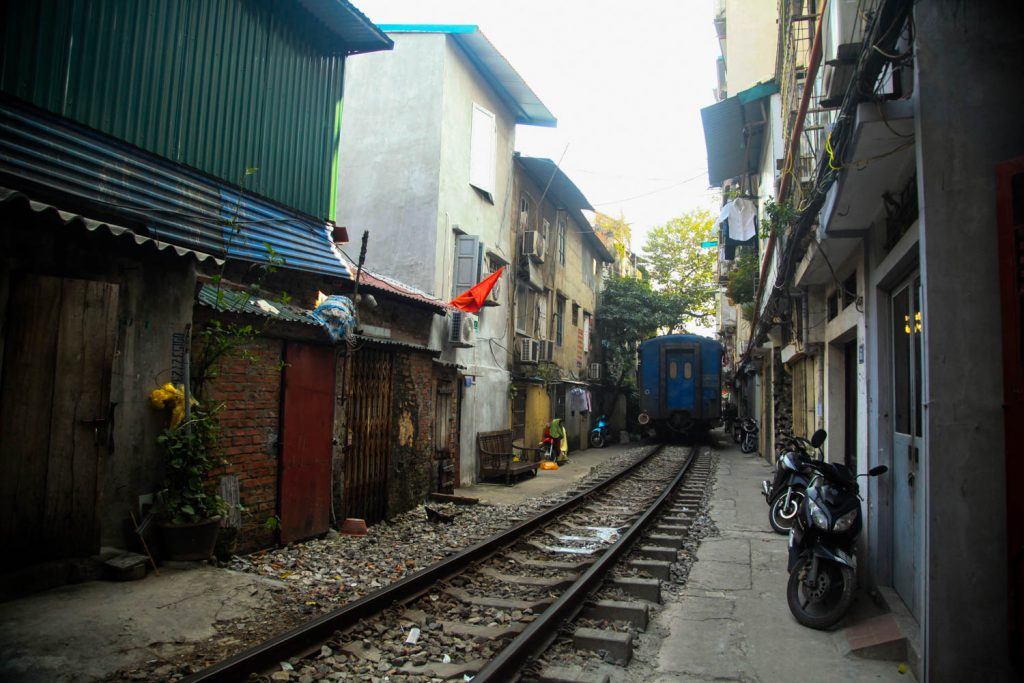 Be Careful On the Tracks

Everyone we spoke to told us the train passed only twice a day. The locals are the best people to ask, considering they are there everyday. However, when we went to the Hanoi Train Track, we witnessed the train pass twice within an hour.

Even though we believe we may have just gotten lucky, we were not prepared to see the train for a second time. We were on the tracks taking pictures and heard what we thought was a horn. Quickly we turned our heads to look at each other, exchanging expressions of confusion. Suddenly we saw the train heading our way so we quickly grabbed our stuff and jumped off the tracks.

Although the locals will most probably try to give you a heads up, try not to get too distracted when you are there. You never know, you might get to experience the train passing twice like we did. Bonus! 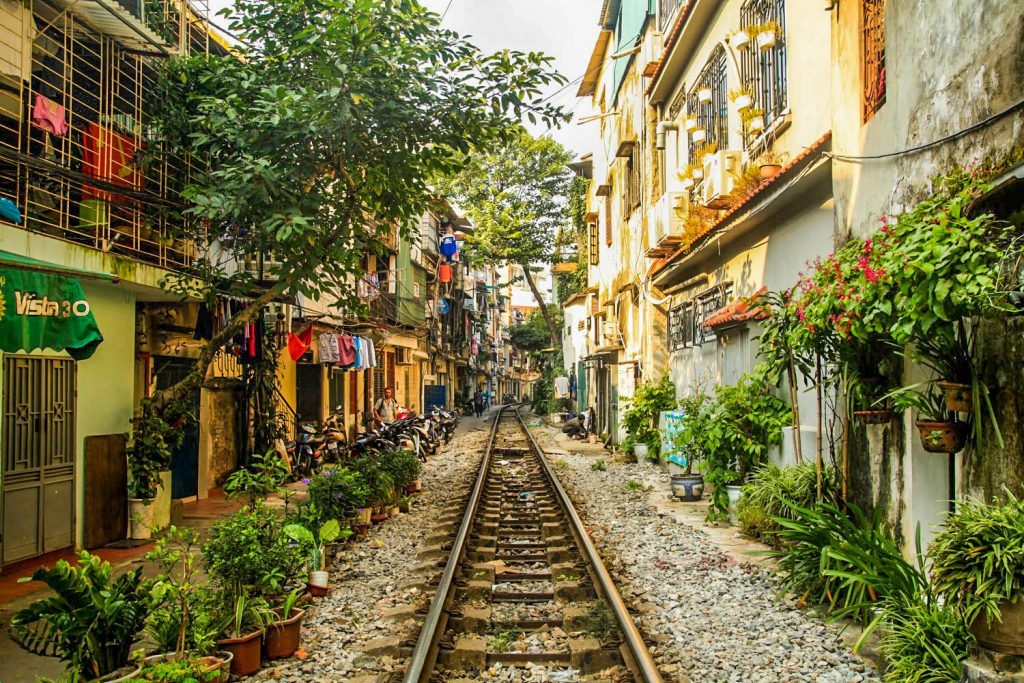 If you are looking for other things to do while you are in Hanoi, check out this blog post: 5 Things to Do in Hanoi